Our demining robot, DMR, was interviewed by NHK ( Japanese natioal broadcasting TV) on the day it started demining operations in Cambodia.
You can see the video and the web article from the link. 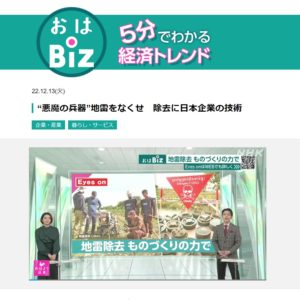 [Contents of the News:]
“Eyes on. Landmine Clearance with the Power of Manufacturing”.

Announcer in studio:
This video shows many landmines found in Ukraine as a result of the Russian military invasion. Landmines have been buried in the past whenever conflicts have occurred, and in Cambodia in Southeast Asia, many residents are still being killed 30 years after the end of the civil war. To solve this problem, a Japanese company has developed a robot that removes landmines.

Narrator:
A robot operating in a Cambodian minefield. By blowing strong air pressure from the tip of its robotic arm, it clears away the soil and digs into the ground. The air pressure is adjusted to prevent the mines from exploding, and the robot is operated by a person from a distance. The robot was developed by a start-up company with four employees. The CEO is Mr. Imai who used to work for a precision parts manufacturer. He knew about the landmine problem just as he was thinking of developing a new business by applying the technology he had developed in his work to robots. It is estimated that more than 4 million landmines remain in Cambodia. More than 1,100 people have injured in the recent 10 years up to last year. What Mr. Imai observed in the fields was the way deminers clearing many of the landmines despite the risk.

IOS CEO Imai:
A solution to a dangerous and a hard work by machinery. This is what we wanted to do.

Narrator:
Mr. Imai focused on the method of blowing compressed air. The technology used in tree care work to excavate soil without damaging the roots of trees. In July of this year, the robot passed a performance evaluation test by CMAC, and last month, the system was put into operation in a minefield in Cambodia. A professional team from CMAC who has mastered how to use the robot is taking on the challenge of removing mines. The location of the mines was confirmed beforehand using a metal detector, and the robot was positioned. Soon after starting work, unexploded ordnance was found in the soil. It was also confirmed that the process can save a much shorter time compared to manual work. After making further improvements, the project team hopes to utilize the system not only in Cambodia, but also in landmine contaminated countries.

IOS CEO Imai:
I think it is good that people who could not use their land because of existence of landmines can make effective use of their land by clearing landmines, and can work and build roads there, so we hope we can help them free themselves little by little from landmines.

Announcer in studio:
I think it is a hard reality that we must use this kind of technology, but I hope that the day will come soon that we can live in peace if we can safely proceed with the process of landmine clearance.

Announcer in studio:
That’s true. The company has only one robot now, but they are planning to increase the number of robots by nations support the demining work purchase them, and spread the technology around the world, including to Ukraine. There are high expectations for how Japanese technology can contribute to the demining activities.